Rapid growth and development of the capital contribute to regular growth of private and public companies, which in turn leads to an ever-increasing demand for office space of "A" and "B" classes. Greater concentration of office buildings of "A" class is observed in the administrative center of Astana on the Left Bank, as well as in the old center of the Right Bank.

The average base rate for the office space of "A" Class in the IV quarter 2014 per month was 42 USD per square meter of rented area, and the range of rates varies from 35 to 50 USD. The basis of pricing are: the location of the office building; presence / absence of an open guest and covered parking area; the level and range of services provided; security-access system; quality of the interior decoration (furniture); open planning (zoning) and so on.

The following business centers are the most demanded by potential tenants: BC «ASTANA TOWER», BC «ARMAN» on the right bank; BC «Q», BC «SAAD», BC «RENCO», BC "On water-green boulevard", BC "Beijing Palace" on the left bank.

* The rental rates are relevant for the period of the IV quarter of 2014. The rate of the leased area includes expenses on utility bills, except communication and Internet. Might be subject to a slight change in rates depending on the area of the rented space and the selected floor.

The number of applications for rental of office space of "A" Class, recorded in the IV quarter of 2014 by «East House» Real Estate Agency specialists, active study of the market in this segment, give reason to draw conclusions that there is an absence of an excess supply of quality office space, meeting the requirements of the class graduation and adequate cost per square meter. In 2015, we should expect to maintain the level of demand for office space of "A" Class and, as a consequence, increase in rental rates. As well as a stable activity of proposals for office space of lower class, maintaining price level.

The rental market of the residential real estate of the business and premium classes in the IV quarter of 2014 maintained its consumers’ demand. At this, one can observe that potential tenants are more interested in the Left bank of the Capital, which is due to the location of administrative complexes in this area, as well as due to the novelty of the residential complexes. Interest in the “Highvill” residential complex, situated on the right bank, remains unchanged. There is a decrease in demand for the apartments of the elite class in the “old” center of the right bank, which in turn has led to the decrease of the rent rate in the area. Comparing the data of III and IV quarters of 2014 one can conclude that in general there was no change of so-called popular capital areas.

The rental rates for the residential real estate of the business and premium classes in the IV quarter of 2014 maintained its level. Slight fluctuation, in the range of 5-6 %, is conditioned by negotiations with the lessors, who are willing to rent out their residential objects due to the winter season with low activity. The only exceptions are the apartment on the right bank, with the drop of the rental value in the range of 10-12%.

Summarizing the results of 2014 it can be stated that the combined share of the real estate of business and elite classes, available on the capital’s market, amounts to almost a quarter of the total market. From the beginning of the year, the number of proposals increased by 6%, conditioned not only the release of previously leased facilities, but also by new appearing facilities finished after construction. The relative stability of pricing for rental property of business and elite classes forms a constitutively active picture of supply and demand. 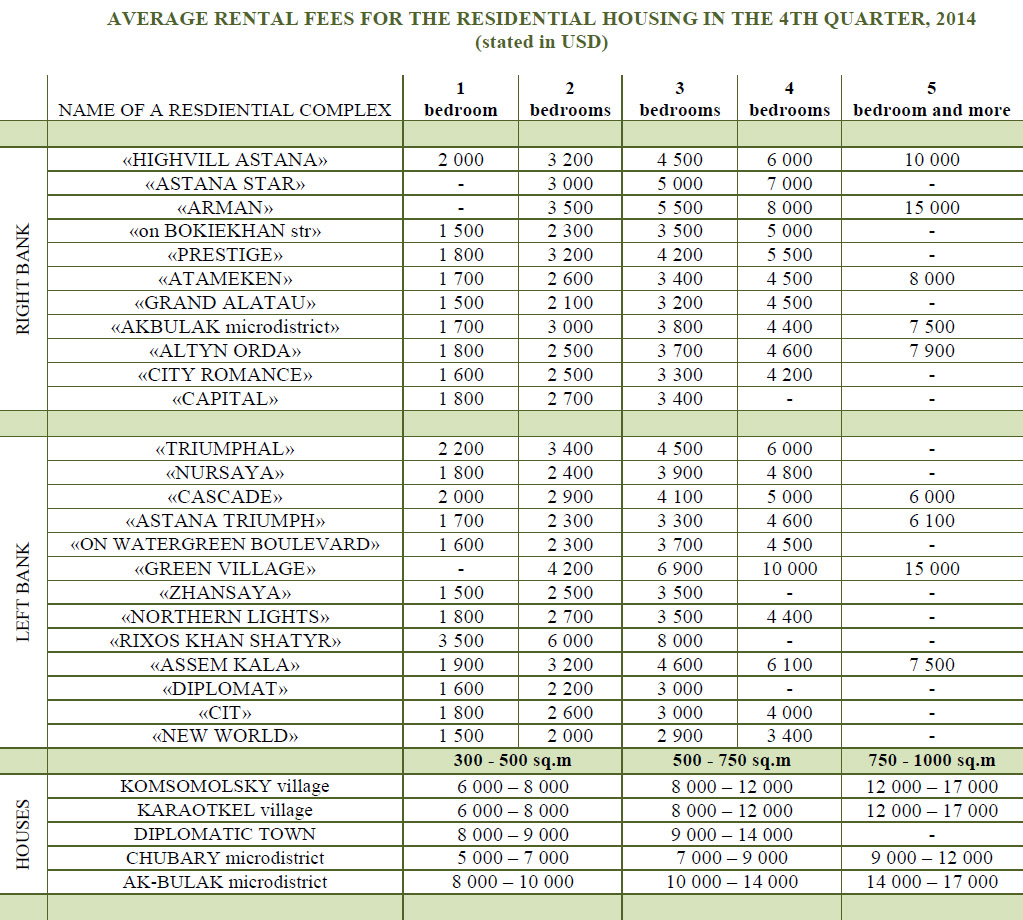 Rental demand for residential property of premium and business classes in the IV quarter of 2014 confirms its viability. Changes in the housing market of the capital during the year, seasonality, pace of construction, release of new houses, and some crises do not have a significant negative impact on the supply of residential properties. However, changes in the foreign exchange market, have led to some adjustments to the structure of demand. The number of requests for apartments and cottages from 10 000 USD in the second half of 2014 decreased by 22%. At this, an increase of the consumer’s interest was noticed in the objects from 4000 to 5000 USD. The highest percentage of requests for search, i.e. about 67%, was for the premises with price up to 4000 USD.

According to estimates made by the experts of the «East House» Real Estate Agency, in 2015 one can confidently predict active actions from potential tenants; with a tendency for growth of the requirements for the apartment, its size and layout, quality finishes, furniture styles. Insignificant movement in rent rates is expected upwards in the first half of 2015 within 4-5%.